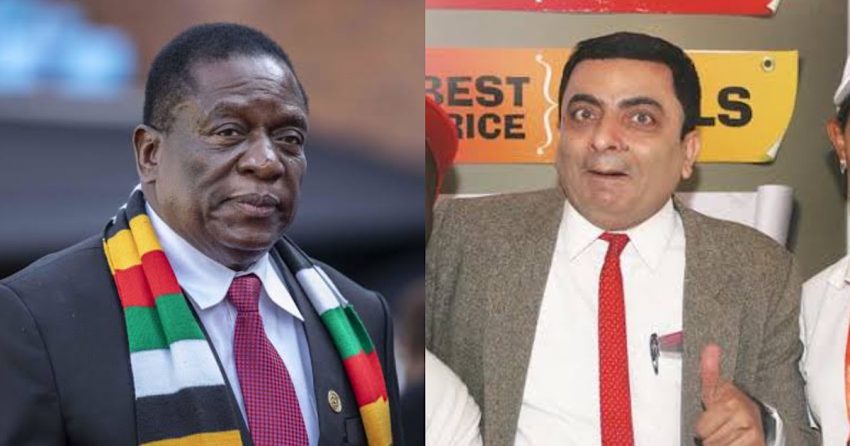 Zimbabwe’s President Emmerson Mnangagwa in a hilarious tweet has asked Pakistan to send the real Mr. Bean next time following his country’s win in the T20 World Cup.

The cricket match became the talk of the town after it was revealed that a Pakistani man pretended to be Mr. Bean at the Harare Agricultural Show.

The Zimbabwe fans sought revenge against Pakistan in the T20 World Cup match, triggering a hilarious meme fest on Twitter.

“As Zimbabweans we wont forgive you,” the man wrote. “You once gave us that Fraud Pak Bean instead of Mr. Bean Rowan. We will settle the matter tomorrow just pray the rains will save you.”

As Zimbabweans we wont forgive you…you once gave us that Fraud Pak Bean instead of Mr Bean Rowan ..we will settle the matter tommorow just pray the rains will save you…#ZIMVSPAK

Following the Chevrons’ win against Pakistan, Zimbabwean President Emmerson Mnangagwa took to his Twitter account to congratulate his side for sealing a historic win.

He also warned Pakistan against sending the fake Mr Bean. “Next time, send the real Mr Bean,” he tweeted.

What a win for Zimbabwe! Congratulations to the Chevrons.

The Pakistani Mr. Bean is a comedian, Muhammad Asif, who hails from Karachi. He became famous due to his resemblance with the British sit-com character.

He also acted in a number of commercials with Pakistan’s renowned names, including Shahid Afridi.

Pakistan Prime Minister Shehbaz Sharif also responded to the Zimbabwean President remarks about the Pakistan cricket team. In his reply, the PM said that “we may not have the real Mr Bean, but we have real cricketing spirit.”

He added that the Men in Green have a funny habit of bouncing back. PM Shehbaz then went on to congratulate the Zimbabwe’s President for his team’s victory.

We may not have the real Mr Bean, but we have real cricketing spirit .. and we Pakistanis have a funny habit of bouncing back 🙂