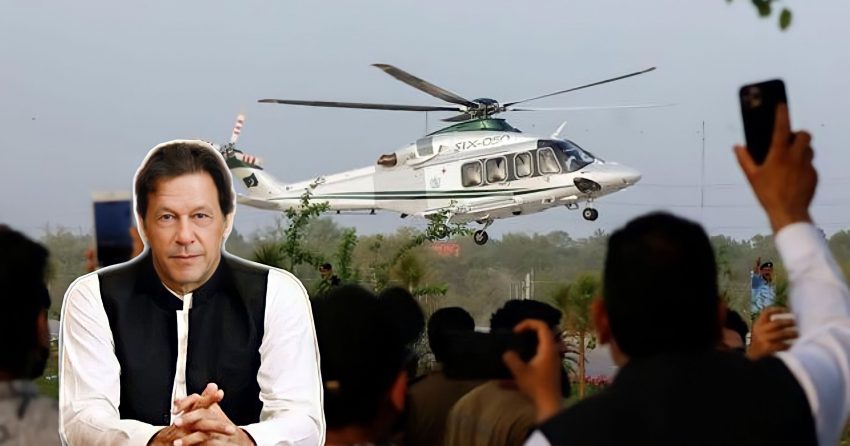 On Friday, the 6 Aviation Squadron’s commanding officer presented a comprehensive account of the costs associated with the helicopter utilized by former Prime Minister Imran Khan in the Senate.

As per records provided by State Minister for Law and Justice Shahadat Awan, it was revealed that former Prime Minister Imran Khan utilized a helicopter for transportation between his personal residence in Bani Gala and his official residence at Prime Minister House, which is located 15km away.

During his tenure from 2019 to March 2022, the expense incurred for traveling by helicopter amounted to Rs275,000 per hour.

The minister revealed that the helicopter was utilized for a total of 497 hours in 2019, incurring a cost of around Rs131.94 million.

In the following year of 2020, the helicopter was utilized for an additional 522 hours, resulting in an expense of over Rs143 million.

Furthermore, in 2021, the helicopter was utilized for 450 hours, with an estimated cost of Rs123 million.

Despite the former prime minister’s promise to lead by example and cut down on unnecessary expenses, it has been revealed that the use of a helicopter during the months of January to March 2022 cost over 35 million rupees and logged a total of 127 hours in the air.

This excessive use of transportation has been a point of contention among the public and critics, as it stands in stark contrast to the austerity measures the former prime minister had pledged to implement.

Last April, following the fall of the PTI government, Marriyum Aurangzeb, the newly appointed Minister of Information and Broadcasting, alleged that the former Prime Minister Imran Khan’s use of a helicopter while in office resulted in a staggering expense of 984.35 million rupees.

Specifically, Aurangzeb stated that the cost of transportation from Bani Gala to the Prime Minister’s Office amounted to 472.36 million rupees, while the maintenance expenses of the helicopter exceeded that amount at 511.995 million rupees.